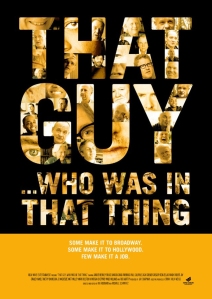 That Guy… Who Was In That Thing sits down with 16 recognizable “character actors”, talks about their lives and times, and the ups and downs of trying to carve out a living in Hollywood.  It is quite possibly the most aptly titled movie I’ve ever seen.

“Character Actors” are the guys that play the lawyer, doctor, politician, cop, business man, middle manager, prisoner, guard, stooge or lackey in pretty much every movie or TV show ever made.  Maybe they have a role or show that most people remember them from, maybe they don’t.  Sometimes a That Guy has appeared in enough stuff, you might even remember his name when you see it in the credits.  Most of these guys aren’t those guys, but you’ll definitely remember their faces.  When the movie’s over, you’ll likely also remember their stories.