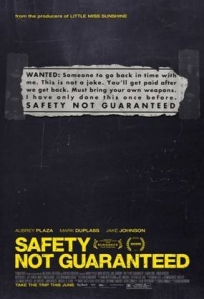 “WANTED: Someone to go back in time with me.  This is not a joke.  You’ll get paid after we get back. Must bring your own weapons. I have only done this once before. SAFETY NOT GUARANTEED.”

Aubrey Plaza plays Darius, a young, blunt, disinterested intern who’s still looking for something to give her life meaning. Up and Coming “That Guy!™” Jake Johnson plays her narcissistic writer boss, Jeff. Along with another socially awkward intern, this unlikely trio travel out to a small Washington town in search of the man who placed the above ad.

Eventually they find Kenneth, played by another up and coming “That Guy!™” Mark Duplass.  When Kenneth gets spooked by Jeff, it’s up to Darius to reel him in if they ever want to find out just how crazy Kenneth is… or isn’t.

From that point on, we’re treated to almost every quirky Rom-Com trope you can imagine.  In case the will-they-won’t-they awkward chemistry between Darius and Kenneth isn’t enough, there’s a side story involving Jeff and “the one that got away”.  Just like seemingly every other quirky indie rom-com that’s come out of the woodwork lately, we’re treated to “ironic” attempts to turn the tropes on their heads.

I get it.  Sci-Fi is big business now, and Sci-Fi concepts require a certain suspension of disbelief that makes it easier to swallow some of the general bullshittery that takes place in a romantic comedy.  But I’ve got to tell you, if you’re going to sell me a story about time travel,  your fucking story better well feature goddamn time travel.  The “suspense”–I guess you’d call it–of this movie comes not only from whether or not Darius and Kenneth will end up together, but also whether or not Kenneth is completely full of shit, completely insane, both, or neither.

Or maybe he’s just looking for the Power of Love.

Probably the best things about the movie are the more subtle sight gags.  After a hard night of drinking, the awkward, young male intern Arnau (Karan Soni), is just seen in the backseat in a state of obvious hangover agony.  In the same vein, the general design of the movie adds a lot of its humour. It’s no accident, I’m sure, that Kenneth looks like he’s fallen out of an 80’s teen movie that may or may not have featured a Delorian, Kickboxing, or an overworked smoke machine.  The locations have a very authentic rural hideaway for the bat-shit crazy feel to them.  The whole film was clearly lovingly crafted.

The thing that upsets me about the movie, though? The characters are just charming enough, and the story is just interesting enough, that I had to sit through the whole thing just to find out what happened.  That’s not really a flaw in most movies.  That’s really admitting that it kind of works.  The trouble is that there’s just nothing original going on here, and everything is just okay.  I wanted to stop watching… I just wanted to find out what happened a little bit more.  Nothing, no one, really excels.  The laughs are too spread out. The romance isn’t really touching.  And in this age of quirky indies I’ve seen several other rom-coms with Sci-Fi concepts that work better at hooking the viewer on the gimmick, telling the love story, and surprising the viewer in the end.

If you’re new to this strange sub-genre crossover of Indie films, Rom-Coms and Science Fiction (and it’s a concept you think you might be interested in) the film is probably worth checking out.  If you really enjoy this type of thing, you’ll likely enjoy Safety Not Guaranteed.  If you’ve had your fill of quirky indies and rom-coms a loose Sci-Fi connection, maybe pass on this one.  Everyone else… just stay away.