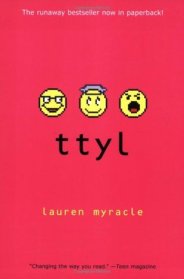 I remember seeing the cover and thinking, “What the fuck is this shit?” Bright pink with cutouts around some emoticons and the title is “ttyl”? Ugh. Then I opened it to find bright blue Comic Sans staring me in the face. Comic Sans?

I passed it over to my now-ex but then-wife, Mel. “Have you seen this shit? What the fuck?”

“That’s the stupidest looking book I’ve ever seen. You should buy it,” she said.

That was probably 2 years ago now. Somehow it managed to survive two purges. Somehow it ended up moving with me. And somehow, it managed to get randomly pulled from The Boxes of Books I Need to Read Before I Buy Another Book.

Well, I read it. It’s not for me. Whoever it’s for, I’m sure they absolutely love it. 13 year old me might’ve even liked it. I liked some pretty dumb shit.

“ttyl” follows the story of 3 friends and their first semester of a new school year. Their stories play out like 3 episodes of Degrassi. They have their expected “edgy” ups and downs, break up, make up, etc. Nothing truly surprising here, except maybe the author’s obvious desire to Keep It Real™ (Is that still a thing people say?  I hope not… ) by having the girls–each of them a token personality, best represented by one of the emoticons on the cover–talk about “major” developments at school, and all sorts of things that concern Teen Girls…  sex, boys, reputations, bitches, clothes, appearances, etc.

Go ahead. Click on this shit. If you dare.

I’d imagine this IM chatlog format allows it to feel more voyeuristic for a reader that’s interested, like you’re snooping on a diary, or your sister’s computer or something. It also allows the girls to seem fairly realistic. At least they do to me… for all I know/ever knew about teenage girls. The author does a good job of creating unreliable narrators, since the girls are pretty much completely unwilling to tell the truth to each other most of the time.  I found it quite easy to see the “hidden” depth of these characters through their inane prattle.

Unfortunately, as much as it might work for someone else, it pretty much enraged me to read this book. The girls are as frustrating and unrelatable as real life teens, with their horrible choices and lack of common sense. The spelling and grammar is non-existent, thanks to the format. Plus, Comic Sans. All these things add up to giving the book a very honest and believable presentation.  But pretty much everything that makes the book feel “real” also makes me want to slit my throat and collapse in a bloody curled ball, exhausted and raging at the inevitable downfall of humanity.

So, in a way, the fact that I hated it as much as I do means that it’s actually probably a pretty good book for its target audience.  I have no doubt this book series (Yes, it appears to be a fucking series) will gain a fond nostalgic following in the future.

I’d say “Get off my lawn,” but I don’t have one anymore. So I’ll have to settle for something else, instead.

“Kids today with their Chat Books! Back in my day book gimmicks made sense, like choosin’ your own adventure an’ Pop Ups, like God intended.”