I find it incredibly funny how things work sometimes.

I’m not exactly sure how old Funko’s Pop! Vinyl Figure line has been going, but I can remember what I said the first time I ever saw one.

“That’s the stupidest fucking thing I think I’ve ever seen in my life.”

I was looking at a wall of Marvel and DC figures in Chibi form, with price tags in the $20 range.  They were sitting next to a shelf of dusty looking bobble-heads.  I noted this, because I thought next to shitty bobble-heads is exactly where this shitty set of Chibi Fantastic Four Folks belonged.

“You’ll never catch me buying one of those,” I said outloud to no one in particular.  I like to talk to myself, because being a huge neckbearded mother fucker looking at a wall of old toys doesn’t make me seem creepy enough.

Last year, though, I discovered they were making a Masters of the Universe set in their line.  I skimmed over a few articles on the subject.  The line was going to consist of He-Man, Skeletor, Hordak, She-Ra and Beast Man.   Nothing really shocking there, and I found myself giving only the smallest, casual sort of fuck about the line.

I never wrote about them, I never commented on them, I certainly never looked into what it would take to buy one of them.

So, how the fuck did I end up with one?

Flash forward a few more months, and I read another article.  This time, it’s about how Beast Man, who’s been designed for the line, has been pulled, and at Mattel’s request, Spikor has been added to the line up.   They didn’t want to make 6 figures in the line… they wanted to pull the already sculpted, fan favourite Beast Man, and put in Spikor, who (despite what I  might think of him) pretty consistently appears on people’s Top X Shitty He-Man Characters lists.

Here’s my theory.  It really can be the only explanation.  Some how…  someone important heard what I said in Spin-It Records that day.  They adjusted their tie like Barney Stinson and said, “CHALLENGE ACCEPTED!” with a raised eyebrow.  Using their top level access to NSA created files, this wicked Mattel employee found the file labeled Canadian Fat Guys With Glasses and the Stupid Shit They Waste Their Money On, they tracked me down, and saw my screen name.  He immediately called Funko, and screamed “STOP THE PRESSES WE NEEDZ SPIKOR!” into the phone.  After slamming it down on the receiver before getting any kind of “But, Sir…” reply, he leaned back in his chair.

“Gotcha, you fat fuck,” he said through an evil smirk.

And the worst part is… it worked.  From the moment I learned that this figure was coming down the pipeline, I was hounding my LCBS, watching for reasonably priced pre-orders online, trying to figure out when they would be released.

Today was the day.  I ended up reserving it at my LCBS, and I picked it up today.  (I also picked up The True Lives of the Fabulous Killjoys, and The Origin of Hordak one-shot) 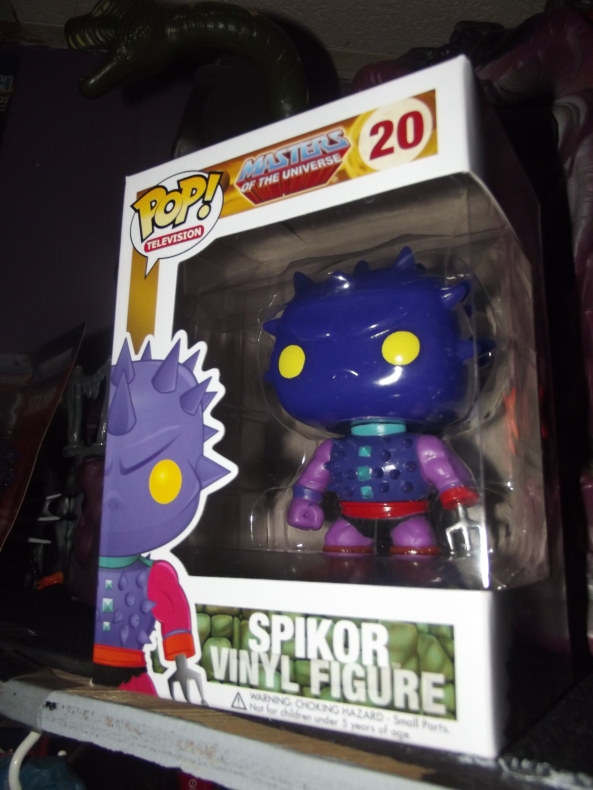 I hope this doesn’t awaken anything in me.

So, once again, I’ve got every commercially released Spikor that I’m aware of the existence of.  I’d love to get some prototypes, or some customs, or a carded 80s figure… but throwing hundreds of dollars at a toy is still not quite something I’m ready to do.

As you can see up at the top of the page (for the time being, anyway) I’ve got all 4 of them hanging out in front of Snake Mountain.

Here’s the pic, in case it’s not active any more… or you’re too lazy to scroll up.

As for Pop! Vinyl Spikor… he’s cute, I guess.  I’m still not sold on the line.

Their heads turn.  That’s the articulation.  The sculpt is surprisingly detailed for a squat little Chibi figure, though.

There’s nothing special about these cutesy Chibi Pop! Vinyl figures.  Unless you’re a die-hard fan of a property, who must have ALL THE THINGS related to it, I really don’t recommend them.

4 comments on “Mattel & Funko are Evil.”