Time for another Review Grab Bag.  Continuing with last month’s theme of having absolutely no theme, we’ve got a classic animated feature from Disney, a classic 80s toy, a debatable modern sci-fi classic film, and a relatively middle road, forgettable graphic novel. 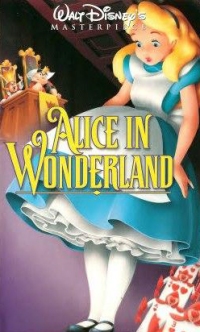 Honestly,  it was only about a year ago that I actually sat down and watched this film.  It’s one of those films that the “Disney Archives” haven’t treated as a Classic, or Masterpiece, or whatever term it is they slap on movies they retire for decades at a time, until a new video playback medium comes along.  Not retiring it in the 90s basically gave know-it-all-teenager me no interest in watching it, because I’d always have the opportunity to watch it.

Anyway, Charlotte loves it, and I’ve since discovered that I missed out.  I really enjoy this.  It’s not constantly laden down with singing.  It’s every bit as trippy as the story deserves.  The animation quality is every bit as good as most of the early Disney features, and it’s got the perfect level of creepiness that won’t necessarily give your kid nightmares… Of course, just like every old cartoon (and several new ones) there’s always that chance.  It’s not an example of Disney perfection, but it’s good enough that I don’t mind in the least that it’s been on an almost constant loop for the past 6 months.  4/5

Want to feel old?  Take a second to realize that most kids today have absolutely no reason what-so-ever to think Soundwave or Blaster are awesome.  They don’t know what the fuck a cassette tape is.  Hell, they barely recognize CDs.  (Shouldn’t these discs have a movie on it?)  Their music comes off of some wafer thin square a little bigger than a quarter.  So when it comes to transforming robots, the guys that turn into a Walkman and a Ghettoblaster don’t hold up against Jets, Tanks, Cars, Semis and fucking rocket ships.

Which brings up another question:  How important was music in our lives, back then, that a fucking transforming Walkman with a monotone voice was the most badass motherfucking thing ever created?

But this isn’t Soundwave, this is his goodie-little-two-shoes Autobot analogue, Blaster.  If Soundwave had never existed, Blaster might’ve been King.  But since he did, Blaster largely plays second fiddle.  He’s bigger, but less articulated.  He’s a good guy, though, so pretending to be him made it less likely you’d get in trouble with your mom for doing something bad, like unravelling all the Saran-Wrap to form Energon Cubes.  Blaster comes Highly Recommended.

Anyway, in Equilibrium, World War III was particularly bad on us, and the government afterwards decided that the only way to stop war is to stop human emotion.  That leads to some serious Fahrenheit 451 bullshit to go down, as “Father” decrees everything that might inspire emotion illegal.  The populous of the movie’s major city-state walk around mindlessly from task to task, dosing their allotted daily emotion-surpressing drugs as required.  Meanwhile, outside the city-state, rebels flaunt their crazy colours and paintings and music and pets, generally mucking up the perfection of emotionless living.

The premise of the movie isn’t any more or less ridiculous than most other dystopian cautionary tales, but to me, the reactions of the main characters, and their motivations were ridiculously muddled.  Drugs or no drugs, Christian Bale is perfectly willing to watch is wife, the mother of his kids, be incinerated alive…for the crime of loving him, but murders almost a dozen people in cold blood to save the life of a fucking puppy.

Other than that, though, the film has some good action scenes, some fantastic cinematography, some decent (although stupid) plot twists.  And Sean Bean’s in it… so you know everything works out okay for him.  4/5

I picked this graphic novel up in a Thrift Store, on the kids book rack.  Why doesn’t anyone that works in a thrift store actually look at the pictures in a book before just throwing it on the kids rack?

Anyway, this is the story of a Scotland Yard detective called in to help the Vatican investigate the suspicious death of the Pope.  Right out of the gate, the story is as predictable as it is ludicrous. Despite that, it’s still an enjoyable read.  There’s nothing fresh here, but the main character, Charlie Northern, is very enjoyable.  As he gets deeper and deeper, he’s forced into a crisis of lack-of-faith.

The book’s art is an interesting, stylized blending of west-meets-east mixture of classical European art and Manga, and is without a doubt the strongest feature of the book.  Anything this stylized though, always comes down to taste, and if after a dozen pages or so, if the art, or narration doesn’t draw you in, you might as well put the book down.  There won’t be anything for you here.  3/5