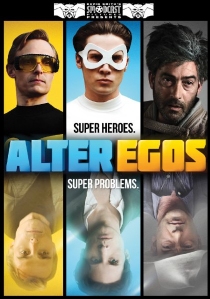 Jordan Galland’s Alter Egos asks what would happen to all the world’s super-heroes, once all the super-villains are locked up.  Brendan (Kris Lemche), and his super hero alter-ego Fridge (short for Refrigerator).  Brendan’s stuck in a rut.  He feels run down and unappreciated.  His girlfriend has been cheating on him with his alter-ego, Fridge.  In the meantime, Fridge has been called to a remote motel by the Super Corps aid fellow hero C-Thru (Joey Kern) in what should be a run-of-the-mill prisoner transfer.  Things get complicated when Brendan falls for the desk clerk, Claudel (Brooke Nevin), and draws unwanted attention of her jealous police officer admirer, Jimmy (Danny Masterson, That 70s Show).

On one hand, Alter Egos seems to attempt to mix The Incredibles with Suicide Kings.  However, in the other it ends up throwing in ham-fisted globs of Indie Rom-Com in, removing whatever semblance of originality it might have had.

So… is this a thing now?  The Super-Indie?  This, Defendor, Super…  Until now, I hadn’t seen any of them, but it seems like Kick-Ass opened up the door to a ton of shitty imitators, waiting to show the “regular side” of being a Man in Tights.  I haven’t really heard anything about the others… but if this film is any indication, I’ll probably take a pass on the sub-genre entirely from here on out.

I’m not sure I can explain exactly where this film fails for me.  I went in completely blind, picking it off the Netflix list, only because it had costumed people in it.  It didn’t take long to realize it was another in a long line of Quirky Indies, and that I should just be thankful that Michael Cera wasn’t in it.  Don’t get me wrong… I like quirky, and I like super-heroes, and if someone makes a NEXTWave:  Agents of Hate movie, I’ll be first in line.  But here, nothing was really working.  The jokes weren’t funny, the drama wasn’t dramatic, and even the stuff that was plainly there for the sole purpose of adding camp value, just… didn’t.

Except for this guy. He’s, like, Adam West levels of fake serious.

There are two stand outs of the movie.  One is Joey Kern’s C-Thru, who’s put in the position of playing the Straight Man to Brendan/Fridge’s identity issues.  The other, John Ventimilglia (The Sopranos) as “The Shrink”, is the prisoner requiring transport.

Kern plays a decent straight man, and tries to stick to the mission when things go awry… almost, at one point, approaching Adam West’s Batman levels of taking the ridiculous-too-seriously.  Unfortunately, Fridge’s antics aren’t anywhere near funny, so C-Thru’s straight man ends up failing, too.  Ventimilgia, however, clearly has been around the character actor block, and it shows.  He does a fantastic job as The Shrink, a mind reading, controlling super-villain who’s been locked up so long, his heart’s not in the game any more.  Unfortunately, his performance can’t over come the awful rom-com antics and cookie-cutter problems and resolutions that bookend his section of the movie.

Oh, Claudel, You’re so ball-bustingly witty! Tell me again about how you love Dr. Seuss.

So, once you’ve thrown your fresh cut dough onto your story sheet, and pre-heated your ovens to 350°F, you can grease your cookie sheet by shooting a movie that’s incredibly unremarkable visually.  For all the quirks of an indie movie’s dialogue and characters, there should at least be a moment or two where one says “Hmm… that looked interesting.”  But that doesn’t happen here.  The camera is static for most of the movie, and it feels (like everywhere else in the movie) that zero risks were taken.

None that you’d want to see, anyway.

Now stick that pan in the oven and let it bake for 90 minutes.  You’ll get the driest, most unfunny cookie that you’ve probably ever seen.  If you’re going to make a Super-Hero comedy… or hell, even a romantic comedy… please, please, please, do not forget to add the comedy.  See up there in my introductory paragraph?  Where I said Brendan’s alter-ego is Fridge (Short for Refrigerator)?  That’s a running gag in the movie.  Get it?  Because who doesn’t know what a Fridge is, right?  Get it?

Aww… to hell with it.  Here.  Have a dry, quirky cupcake.

Accompanying the generic indie feel, is an admittedly decent soundtrack from Sean Lennon, but it sounds perfectly at home in a movie full of “Oh my God, I can’t believe she’s a nerd just like me” romantic conversations…  I’m glad there was no hamburger phone anywhere, because if I had seen one, I’m not sure I’d still have a monitor.

I think I’m most upset because this premise does have potential.  I think there’s several ways that this film could have stood out amongst the sea of Indie, without relying on “See, this one’s got Super-Heroes.” Instead, it pretty much throws every convention it can think of in your face, and hopes that you laugh.  And you don’t.