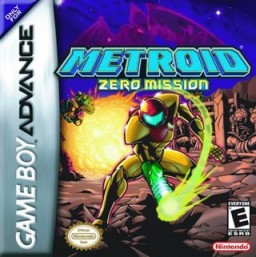 Metroid has been around for almost 27 years.  The original game was released in Japan in 1986, and it got a North American release around the same time the next year.

The original game features a space bounty hunter in a high powered suit named Samus Aran.  Samus has come to the planet Zebes to stop a group of Space Pirates from exploiting an alien species, Metroids, in a bid to rule the galaxy.  The game was incredibly successful, influential and ground breaking.  It’s exploratory gameplay was among the first of its kind.  An incredibly eerie atmosphere, created by fantastic music, level and creature design marks it–arguably–as the invention of the Survival Horror genre of video games.  It’s practically like playing a video game of Alien.  And, of course, Samus Aran is the world’s first (recognized by Guinness Book of World Records) Playable Female Protagonist in a mainstream title, what’s more, is that the discovery of Samus’ gender comes as a surprise ending (Unless you know Justin Bailey…)

So, what happens almost 20 years later when you’ve created one of the most successful franchises of all time?  That’s right, kids… it’s time for a remake/reboot combo.  Enter:  Zero Mission.

In 2004, Nintendo released Metroid:  Zero Mission.  It’s Samus’ retelling of her fight on Zebes.  With updated graphics, gameplay, and story, we revisit the planet Zebes, and Samus’ first adventure, once again.

I don’t know that it’s really possible to talk about this game, without, repeatedly referencing it to both the original Metroid (NES) and Super Metroid (SNES) titles.  So I’m not going to try. 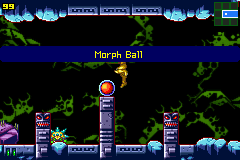 ‘Cause that’s how I roll.

The reason they’re so indivisible, is because of the game being a remake of the NES title, with the gameplay of the SNES title.  Most of the abilities and controls featured in the game come directly from either the original, or the SNES sequel.  The graphics are very reminiscent of Super Metroid, though even on a much smaller screen, they are crisper and cleaner… and generally better than even the SNES title.  This isn’t surprising, though, as most titles on the Game Boy Advance system have slightly-better-than-SNES quality graphics.

What they did do, to try and update and set it apart, is add some short cut-scenes, as you progress through the game.  They’re a nice change of pace, and one several welcome additions to the game.  But what they don’t do, for the most part, is add much to the atmosphere of the game.  Sure, they can only add to the story…  the original NES title doesn’t even feel like it has a story, when you’re playing it.  But these cut-scenes feel added in… just tacked on… to me.

Except this one. This one is creepy.

The gameplay, also, is taken directly from the SNES title.  Even with 2 fewer buttons, it seems to play exactly as smooth as Super Metroid.  I had no trouble controlling Samus, and was able to get her to go where I wanted to, and do what I wanted, about 95% of the time.  This is very good, because I am often horrible at platformers.

The level design, once again, is reminiscent of the original Metroid, but is extremely similar to the SNES sequel.  This is probably due to the powers and abilities being the same.  You’re still forced to explore, explore, explore… finding whatever block or enemy you need to destroy and roll/crawl through that will lead you to that next key power-up.  There is lots of backtracking required, as you come up against places you need to return to, or places you shouldn’t be yet.  The boss fights are memorable, but are, for the most part, throwbacks to the earlier games.

Mother, do you think they’ll drop the bomb?

The sound in the game is just as haunting as ever.  Most of the sound effects, I’m pretty sure, are taken either directly from Super Metroid, or just reworked slightly.  It doesn’t matter, because the game sounds fantastic, even coming out of the tiny, tinny Game Boy Advance SP speaker.

One of the most notable changes, though, is that Mother Brain, the original Metroid’s final boss, is no longer the game’s end.  After defeating the Mother Brain, and escaping Zebes, the game isn’t over.  A whole other level, featuring Zero Suit Samus with just a laser pistol, trying to escape the Space Pirates air craft.  This level plays a bit like Metal Gear, forcing you to avoid confrontation, rather than blast through it head on.  That is, until you find yourself another suit.  Then you go back to kicking Space Pirate ass as you try and find a way out. 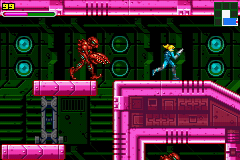 I’d imagine this level is divisive among Metroid fans, because anything that doesn’t feel the same (as well as anything that feels exactly the same) always is divisive amongst a fanbase.  The addition was a welcome change of pace for me… and a bit of a surprise.  I was honestly hesitant to mention it, but it was such a big part of enjoying the game for me, that they were willing to try something different in the 2D realm, I had to bring it up.

Putting down the game, and picking it up later is easier than in the original NES title.  It features a save system, similar to Super Metroid, rather than the password functions of the original North American release of Metroid.

Another way the game sets itself apart from it’s 8- and 16-bit predecessors is in its features.  The game has 3 different levels of difficulty, which adjust how much damage you can take, and deliver, to the enemies and environment.  Beating the game unlocks a “gallery” setting which, depending on your ranking in the main game, unlocks up to 8 pictures.  These, I’m sure, are all readily available on the internet, so this isn’t exactly a game defining feature.

However, the game’s most interesting feature is that not only is Metroid:  Zero Misison a fantastic update to a classic NES title, once you’ve beaten the game, you unlock the ability to play the actual NES title.  That’s right… one of the features is the entire, playable North American release of Metroid from ’87, emulated on the Game Boy Advance.  Since I don’t do the PC Emulator thing, and the original title hasn’t popped up at an affordable enough price for me, this was a fantastic surprise for me after the credits.

If the game has any flaws at all, it’s that it doesn’t feel original at all… because it’s not.  It takes a working formula that exists on other consoles, and gives you more of it.  I’m not one to complain about that, though, unless I’m tired of it.  2D Metroid games are not something that have been thrown around at video gamers on a Call of Duty level of frequency, so I don’t see the problem.  Also, the game is relatively short.  My time, on Normal difficulty, for my first playthrough clocked in at 6 hours, 30 minutes.  That doesn’t include all the times I died, and had to restart.  I’d say a more accurate count would be about 8-10 hours total playtime for the first playthrough.  I consider that not-too-shabby for a Game Boy title.  If this weren’t on a handheld system, though, I’d be disappointed it was so short.

Regardless… if you’ve still got something that plays Game Boy Advance games, and have the chance to pick this up, I highly recommend it.  Whether you’re a fan of the series, or looking for a jumping off point, this really is a great game.