The Evil Dead is the story of 5 University kids who visit a cabin in the woods, find a book bound in flesh and a reel-to-reel, and unleash an unspeakable evil on the world.  There are two young couples, Ash (Bruce Campbell) and Linda (Betsy Baker).  Scotty (Hal Delrich) and Shelly (Theresa Tilly), and Ash’s sister Cheryl (Ellen Sandweiss) comes along as a fifth wheel, because that is required of all Horror Movies.

The characters are archtypical on one hand, but still break the mold a bit.  Scotty is clearly a douche, and Ash is kind of a dork.  None of the women seem to burst out of the gate as whores, virgins or bookworms… but since Cheryl is the fifth wheel, and draws pictures, she’s clearly the bookworm.  She’s also the closest thing to a stick in the mud, so she can claim the Virgin card… until she’s raped by a tree, anyway.

Shortly after listening to the reel-to-reel, the ground starts smoking and possessions start happening, and the world basically turns to shit.  One by one the young college students become possessed by the evil they’ve unleashed, until only Ash remains.  He goes batshit fucking insane, and eventually defeats the demons with the power of Stop-Motion Animation.

This was the first full length feature from director Sam Raimi.  In fact, it was the first full length feature of almost everyone involved.  But Raimi and Campbell stand out from the rest.  Raimi has a definte style of his own, and you can almost always tell when you’re watching a movie he’s directed.  The movie opens with the POV of the yet to be unleashed Evil floating around a lake.  My group of friends always took to calling this particular type of shot “Evil-Vision™“.

Another sequence involves taking close up shots of all the steps that are taken to accomplish a task.  Raimi uses this type of sequence in every movie of his I’ve seen.  The group dubbed these “Build Sequences”…  partly because usually when Raimi uses the sequence his characters are building something… but also because the same type of scene would happen in almost every episode of The A-Team whenever the boys would get captured and locked in a barn, warehouse, or storage room that just happened to contain a bus, tractor, welding gear and tons of scrap iron.

But Build Sequences and Evil-Vision™ aren’t the only experimenting Raimi does with the camera.  There are tons of well framed shots, well edited scenes, and so much memorable imagery  Almost every scene has an image that sticks out in your mind.

Of course, for every moment that can be taken seriously, there are 3 that are laughable.  At several points the movie is way too ridiculous to be taken seriously.  There are editing goofs, continuity problems, one scene is even filmed out of focus.   Even still, there are several other moments that really are scary.  At least they were for me during this rewatching.  I was in a small room with all the lights off and headphones for the sound.  I jumped twice. 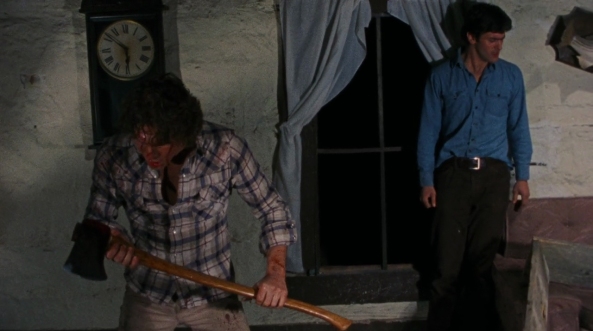 Another interesting aspect of the movie is just how relentless, and ruthless, the Evil is.  Once possessed, Ash’s group of friends constantly try to mess with his head.  They taunt him, cackle like creepy little girls, mimic him, and play possum.  He, and the others, fall for the Evil’s tricks repeatedly, and get attacked for it.  It all adds to the movie being sometimes funny, and sometimes frightening.

That’s really Raimi’s gift, I think.  Every movie of his that I’ve seen (and enjoyed) had a mixture of seriousness and foolishness that really isn’t pulled off by anyone else I can think of.  That’s the reason I was so excited back in the day when he was announced as the director of Spider-man.  Spidey needs to be handled with a serious, but goofy, hand and very few directors I can think of are able to strike the right balance.

I’m fairly sure it had been 14 years since I last watched The Evil Dead.  There’s no particular reason for it.  Maybe it’s because I thought I couldn’t enjoy it any more than I did watching it in a cramped room full of fellow dorm-mates, all drunk off their asses making fun of every cheesy moment.  I remember we’d pause & rewind, pause & rewind whenever something absolutely ludicrous would happen on screen, or whenever someone said, “Did you just see ________.”  It probably took us 3 hours to get through the 85 minutes of movie.  I have a lot of fond memories watching movies that way.

The funny thing is, though, it’s been much longer than 14 years since I gave The Evil Dead any credit at all for being a really good horror film.  I don’t remember the first time I watched it, but I do remember the second.  I was visiting my uncle, outside New Glasgow.  They had a satellite dish, the kind that took up half an acre, and took a half hour to change channels on.  My step-cousin was a huge fan of horror movies, and I had just recently built up the courage to start watching them.  I went through a bit of a pussy-phase from ages 6 to 11.  Since my 12th birthday I had seen all the big names, Halloween, Nightmare on Elm Street, Friday the 13th… their infinity plus sequels, and pretty much every other goddamn movie in the Horror section of 5 local video stores.

My step-cousin asked me if I had seen The Evil Dead, and I said I don’t think so.  He said, “Oh man, you’ve gotta… there’s this tr–I won’t spoil it.”  He threw in a copy they had taped off Satellite TV.  I didn’t remember the movie until we got to the Tree Rape Scene, my step-cousin was literally on the edge of his seat.  The movie came flooding back to me.  You don’t forget the Tree Rape Scene.  It’s a defining moment for the entire movie.  The reason is because it’s both absolutely fucking ridiculous, and absolutely fucking terrifying… if you think about it.

The scene’s filmed on the cheap, using mostly reverse film techniques and people off camera waving around twigs… it looks completely ridiculous.  For that reason it’s one of the funniest things ever put on film.  But if you start to think about it….  if that shit was really happening… there’d be no coming back from that.  You don’t get raped by a living tree and then go home to your spouse and kids, maybe play a little Xbox, watch a rerun of NCIS and go to bed.  That is some “Go Directly to the Mental Hospital” shit.  Fortunately for Cheryl, she gets demonically possessed, so she doesn’t really have to worry about it for very long. 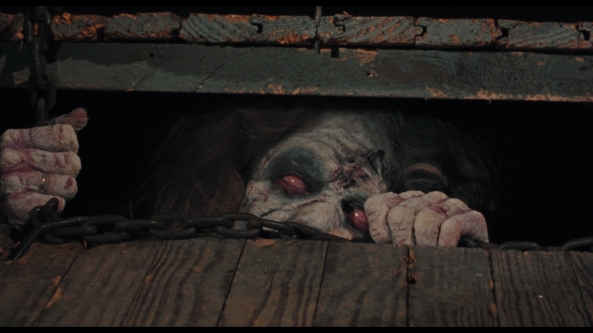 Cheryl doesn’t have much luck in the movie…

There are so many other great moments in the movie, though… the blood pipe, the blood bulb, the blood film, the Love Monocle, Claw Bridge, Ash Going Completely Mental, Doorway Slaps, Flying Somersault Decapitation, Mid-Chokeslam Thumb Eye-Gouging,  Problems with Mirrors Part 1, Ash Vs. Cabinets Part 1 & 2, Card-Reading, Pencil Ankle…  Hell, unless you just finished watching the movie, go watch the movie.

I’ve always held this movie in the 4/5 maybe 9/10 range, depending on what kind of scale I’ve used over the years.  Maybe it’s just because of the excitement of the remake,  but this re-watching of The Evil Dead was easily a 5/5 experience.