This is my seventh attempt at an introductory paragraph for this review.  The problem I’m having is I cannot seriously discuss any element of this game.  In this moment, I am failing as a reviewer on all fronts.  I really want to be objective.  I don’t want to blast every element of the game, because I can see just the slightest sliver of potential.  But the simple fact remains that this game is just so terrible, so awful, such a failure on almost every level imaginable, that it’s actually draining my ability to discuss it rationally.

In a normal review, I’d probably start off describing the genre of the game, or the story.  The game’s genre is a mixture of different God of War knock-offs, largely mimicking  Dante’s Inferno. So, it’s more of a knock-knock-off.

The story is incredibly generic, and so poorly written that the cut scenes made me want to scoop out my own eyes with a spork.  It involves the protagonist and his completely unnecessary side-kick running off to fight in the crusades so that they can find out why Death wants to kill them, and along the way find out whatever happened to the protagonist’s father.  Once you throw in an evil general, and probably an evil priest or something later, you’ll realize you could have pulled this fascinating and engaging story out of a box of Froot Loops, thrown it at the fridge, and watched it fall down slowly until it hit the floor and gathered up unreasonable amounts of dust–so much so that it wouldn’t stick to the fridge the next time you threw it.

Next up, if this review weren’t so shitty, I’d probably cover something that the game did reasonably well.  I guess I might mention that, for a God of War clone, the hack and slash gameplay actually sets itself apart from the pack in two ways.  These two ways, however, also add to how incredibly, terribly awful it is to play.  First off, there are a number of weapons to choose from, and all of them feel weighty, almost realistic…  This little element of realism would add high marks to a polished, interesting, engaging title, with varied gameplay features and well done level design.  However, calling the weapons weighty in this game is just a nice way of calling the gameplay sluggish.  Horribly sluggish.  Press-a-button-and-wait-for-it…

Now I’d probably really rip into the game’s design and gameplay, with a passing mention of surprisingly average graphics.  I’m probably going to have to bust out a thesaurus at some point though, because I don’t want to keep using the same synonyms for “bad” over and over again.  Hmmm… Rueful?  Have I used that?  Should I?  Probably… the game’s pretty shitty.  The game basically has two levels.  There’s Castle-Town, and Hellscape Castle-town.  Now, don’t get excited about that.  I know Hellscape Castle-town sounds pretty fucking awesome… but it isn’t.  It’s basically Castle-Town with fire, and an orange-black hue filter applied to it.  It’s interesting for maybe the first minute or two, but by the time you’ve gone through a half dozen chapters, and realize that this is clearly what the whole game is going to look like, while you give up on timing stupid combos, and decide to mash the same button over and over again through level after level… Where was I going with this?  Goddamnit.  This game has consumed my ability to effectively communicate. 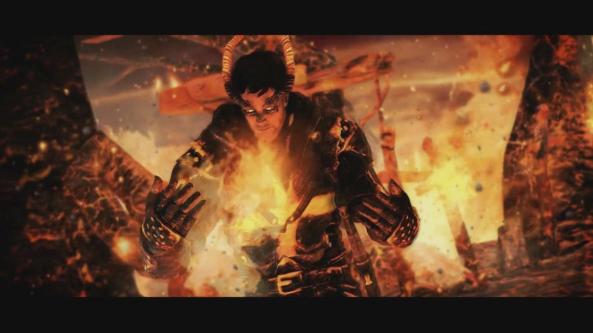 It wouldn’t be so annoying if the game didn’t feel like it had potential.  I mean, it was clearly always going to be a grindfest, but I like grindfests when the grinding is fun.  Every time you come across something new in this game, it only takes the time of a couple of synapses before you lose interest in it, or you realize it was a good idea that was just poorly implemented.  In the end, there’s nothing here that stands out, except a shimmering rainbow of epic failure on basically every imaginable level.

Let’s see here…  Outline, general opinion, praise, complaints… I guess that’d leave me with a closing statement, maybe?  What the hell am I supposed to write here?  The game is awful.  Just terrible.  Normally I don’t write my opinion on a game unless I feel like I’ve finished it, and seen everything it’s got to offer.  While I couldn’t do the former, I’m pretty safe in saying that the latter is true.  This game has practically nothing to offer.  The graphics are okay though, and the animations do seem to feature some pretty good mo-cap work.  But the abhorrent (thesaurus, again) story, with frustratingly bad voice acting,  repetitive, remarkably unfun gameplay and level design all add up to one of the least enjoyable gaming experiences I’ve had… probably ever.

Do not play this game.