So, Charlotte is over 2 and a half years old now.  I’m sure you’ve heard about the terrible twos.  Kids do some of their craziest shit in their terrible twos.  They sing, they dance, they have no shame, they have no volume control what-so-ever, and they are more adept at recording and repeating your conversations in inappropriate situations than Macaulay Culkin with a fucking Talk-Boy.  Everyone that’s ever watched a family film, sit-com, or stand up comedian knows this.

But here at FGWG, I like to try and have your back.  I like to pass on information no one seems to want you to know.  Things like, breastfed infants projectile shitting distances of at least 6 feet with their diaper off.  No one warns you about that.  I thought the total surprises like that were the real danger.  I was wrong.  The real danger is the kind of stuff that you think might be over-exaggerated by others.  Surely certain kinds of behaviour can’t go on for years, with no end in sight.  Well, they can, and they probably will.

I don’t remember anyone fucking warning me about was that there was a very real chance that you would never-ever-in-your-fucking-life close your eyes again.  Seriously.  We’re almost 32 months later, and I think I can count on one hand the nights that she’s slept through the night.  Obviously, this means that for over 2 1/2 years now, my wife and I (mostly her) are stumbling around like extras on “The Walking Dead”.  I’m pretty sure I saw her eyes fall out of her sockets sometime last week.  I can’t be positive, though. 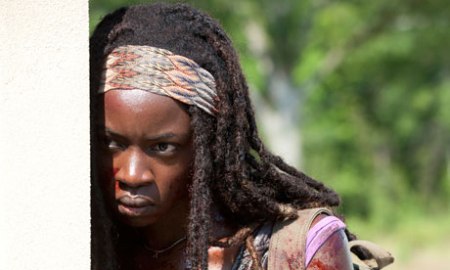 Run, Mel! She’s gonna stab you in the face! THE FACE!

“But Bruce, everyone knows kids don’t sleep.  What did you expect?”  you’re probably asking.  I don’t fucking know when I thought sleeplessness would stop, but I sure as hell figured it would stop sometime before she started saying full sentences like “Daddy, can you tell me the story about when Batman met Cheer Bear?” 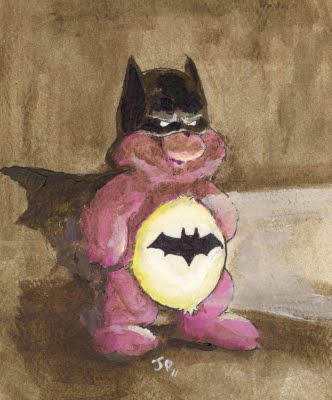 The Hero Care-A-Lot needs, not the one it deserves.

It seems I may have overestimated when her sleeplessness would end.  At this rate it seems quite likely that she may regularly sleep through the night sometime before she starts pulling all nighters before her finals in her freshman year at University.

My point here is that she doesn’t like sleep.  She fights it at every opportunity, which I expected going into this.  The fact that she’s restless, and often wakes up through the night on the hour, every hour, is what was surprising.  Of course, that wouldn’t even bother me so much if she wasn’t also dead set against anyone else shutting their eyes.

She’s obviously some kind of sleep Terminator sent back in time to obliterate all forms of rest and relaxation.  Now, its not even enough that she never sleep.  No.  Now, she can be playing by herself quietly in the living room, and if she happens to notice that I’ve begun to nod off a little bit in my easy chair, she comes rushing over screaming “WAKE UP, DA!” at the top of her fucking lungs.  If I’m unfortunate enough to have nodded off completely in my chair before she notices me, that’s when the really fun stuff happens.  That’s when I’m unable to close my legs in time to avoid the double overhead axe-handle smash she plants directly into my groin.

Incredible tiredness and attempts at ensuring her status as an only child aside, she’s still pretty cute.  “WAKE UP, DA!” has happened often enough that she thinks its some kind of game now.  She’ll taunt us by curling up on the couch, or a pillow and act like she wants to go to sleep.   Then between fake snores, she’ll tell me, “Say ‘Wake up, Char!'”  I do as I’m told and she jumps up, rushes off the couch and makes ridiculous noises.

I have no idea how I want to conclude this post.  I was going to make a falling asleep at the keyboard joke, mashing my head against the keyboard for a moment, but I think instead, I’ll post this image of the Monty Python crew reading about Castle Arrggghhh, which I pilfered from Fogs’ MTESS post. 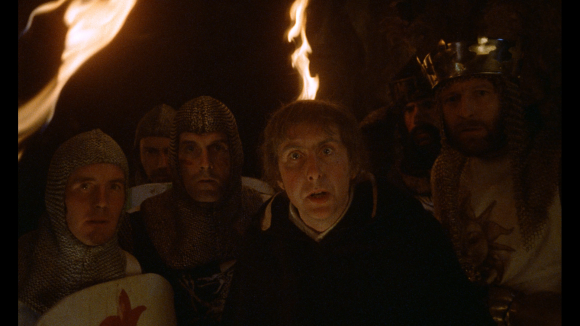 5 comments on “Fat Dad With Glasses: WAKE UP, DA!”